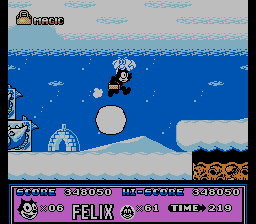 Watch Download (.fm2)
Author notes Discuss
5.91 / 10 Votes: 14
This game is about a classic cartoon character, Felix the Cat, who goes on an adventure to save his girlfriend, Kitty, from a mad professor. It's a simple platformer like any Mario game.
This is a 24.26 second improvement over Randil's previous run. This is due to several strategy changes, such as using the airplane more often in flying levels and using a different power to fight the final boss. For more details, see the author's comments.
This movie has an Atlas Map encode of Round 1-1, which shows the standard encode overlaid on a zoomed out map.
Published on 9/20/2010 12:00 AM
Obsoletes:
NES Felix the Cat by Randil in 22:51.01