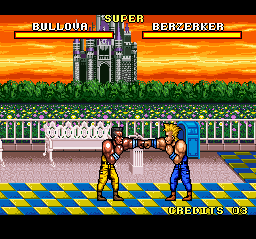 Watch
The Combatribes is a side-scrolling fighter without much side-scrolling, but all the more fighting. Mostly jumping on poor defenseless bad guys and repeatedly polishing the sidewalk with their faces.
Alyosha and Dooty here obsolete the longest non-obsoleted movie (at the time of publication) by over two and a half minutes. Many optimizations were achieved with improved modern tools and careful testing of enemy movement patterns. For more information, see the authors' comments.
The movie this one beats is somewhat legendary due to the fact that it was a result of power abuse: it was submitted, accepted and published by the same person within a couple of minutes. That run took 12 years to get beaten due to the nature of the game and common absence of interest; probably if it was judged properly in the first place, it would've had no chance to get published at all.