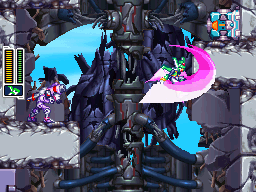 Watch Download (.dsm)
Author notes Discuss
7.21 / 10 Votes: 15
Mega Man ZX Advent is the second game in the Mega Man ZX series. What's so different between the classic series and ZX Advent? First, you get to choose between a male (Grey) and a female (Ashe) character. Then, instead of stealing weapons from the bosses, the player steals the boss itself! Instead of switching between weapons, the player switches between forms using the Biometal Model A. Finally, the player has less freedom to pick the stages of his choice.
Noxxa picks Ashe, the female character, to minimize the cutscenes and to save time.
To play the DSM file, make sure that "Enable Advanced Bus-Level Timing" is unchecked in the "Emulation settings".
Published on 12/5/2010 12:00 AM
See full publication history
Game:
Mega Man ZX Advent
Genres:
Action
Platformer

Emulator Version:
DeSmuME 0.9.6
Webmasters, please don't link directly to the files. Link to this page or the front page instead.
Republication of movies from this site is only allowed under the following conditions:
Do not label them with speculations. If unsure, ask the site staff for details.