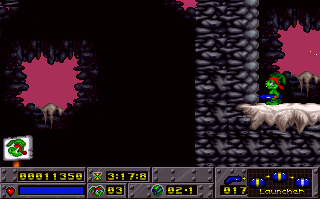 Watch Download (.jrsr)
Author notes Discuss
6.57 / 10 Votes: 21
Jazz Jackrabbit is one of the earliest products released by what was then known as Epic MegaGames, better known these days for producing the Unreal engine. It was viewed initially as being a pastiche of the Sonic the Hedgehog games and arguably developed along those lines, bearing much of the same fast platformer action.
This run completes a special Christmas episode called Holiday Hare. This is the 1994 version of this episode. A run has been made for the 1995 version of Holiday Hare. There is also a run of the original game available.
Published on 12/28/2010
See full publication history
Game:
Jazz Jackrabbit
Genres:
Platform
Shooter

Emulator Version:
JPC-RR r11.2
Webmasters, please don't link directly to the files. Link to this page or the front page instead.
Republication of movies from this site is only allowed under the following conditions:
Do not label them with speculations. If unsure, ask the site staff for details.