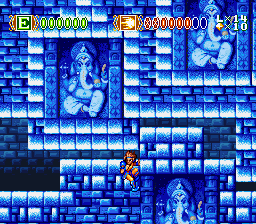 Watch Download (.smv)
Author notes Discuss
7.77 / 10 Votes: 12
Skyblazer (1994) is a relatively obscure gem of a platformer released for the SNES, featuring quite decent music and visuals among other things.
Following the game's truly original plot, Sky, a cocky young hero, has to free a sorceress kidnapped by an evil deity Ashura. In order to do so, he must traverse a non-linear world, collecting various spells, abilities, and powerups along the way. Helping him is the eloquently named Old Man, who teaches young Sky to memorize patterns — just after delivering another insult.
This is 24.3 seconds faster than the previous run, which used a beta version of the game. The final version has longer loading times and more lag, but conversations can be finished more quickly, which accounts for most of the time saved. See the submission comments for details.
Published on 3/10/2012 12:00 AM
Obsoletes:
SNES Skyblazer by Bablo in 24:51.33