Super R-Type is an autoscroller for the SNES. Similar to Gradius 3, you control a ship which can get various upgrades, which will aid you in your quest to destroy the enemies in space. However, unlike Gradius, your powerups are more limited in R-Type, and the auxiliary weapon powerups are predetermined. Most noticeable is the lack of speed upgrades. There is 1 or 2 speed upgrades per level, which means I don’t reach a maximum speed right away as in the Gradius movie. This TAS gets faster as I play more levels. The final main difference is that in R-Type, your ship has a laser weapon which can be charged to release a powerful burst of energy, destroying enemies in one shot.
The game can be very laggy at times, and firing your weapon can often exacerbate the problem. Thus, many enemies are killed using only the detachable force pod and floating orbs – I feel this adds to the entertainment value of the movie as well.
This TAS is interesting, since it has many goals:
There were small tradeoffs of all of these goals at some point in the movie. Many enemies were killed quickly to minimize lag. I could have killed many enemies at the last possible moment while dodging hundreds of bullets, but the result would have been extremely laggy and unentertaining.

Only seen early in the game, I use this weapon a lot in level 2 to help with killing the respawning tanks.
This weapon is fast moving and causes almost no lag, but is pretty weak. I use it a little bit in level 3 to do some nice combination kills and hit a few far behind weak enemies.
This weapon is moderately powerful and can be convenient since it bounces off of walls, but it mostly avoided because it causes a lot of lag. This weapon is featured at the end of levels 2 and 3.
If used correctly, this weapon can be very powerful and can quickly do a lot of damage. However, if one flame doesn’t hit the target, the refire time is very slow. In addition, the weapon can cause considerable lag. This weapon is used extensively in level 5 to kill the powerful dark blue enemies that fire white goo. Also, it is a great ally in my fights against the bosses of level 5 and 6.
This is my favorite weapon on the console and in the TAS. Cluster bombs have the best ratio of damage to lag of any weapon. I repeatedly use this weapon in levels 4 and 7, and on the final boss.

The brief flash and restart at the beginning of this level is when I am completing the level select so I can play in PRO mode. If you look at the bottom left corner of the screen, you’ll see that I select level 11, which takes me from HARD mode to the first level on PRO mode. The level select information can be found here: http://www.gamefaqs.com/console/snes/code/588750.html
Due to a lack of speed and weapon upgrades, I hope no one judges the TAS by this level alone. I finally get my force pod at the end of the level.
I use my charged-up laser a lot in this level to take out the enemies that spawn from the bottom of the screen. If allowed to live, they fire multiple, lag-infested missiles. I finally have a decent speed and fire-power built up by the end of this level. I kill the boss in one shot.
This level is much more interesting than 1 or 2. The drawback is the unavoidable kamikaze fish lag at the beginning of the level. There is also an interesting floating spider toward the end. I get my first floating orb in this level.
This level turned out much better than I originally thought. My original goal was to completely destroy all possible spaceship parts and ignore lag, but lag turned out to be not much of an issue when turrets were destroyed before they could fire the pink lasers. The boss fight is my second favorite.
This level was mostly just killing enemies quickly to prevent lag. I find myself in a tight squeeze toward the end backed up against the far left of the screen, and get a charged shot off just in time (a had about a 2 frame window). I pick up a lot of speed upgrades in this level, and do some fancy maneuvering around the moving walls.
This was by far my favorite level to and boss to TAS, and it was always my favorite level and boss on the console as well. There are two times in this level where fast moving robots fall from the ceiling. The first time, I kill them all, even though it looks like some fell in the lava. This can be verified by watching the movie with background #1 turned off. The second time, I cannot kill all the enemies, as they are spawning from 8 places including 5 ceiling droppings.
I really enjoy the boss fight of this level.
This was actually the easiest level to TAS. I get 100% kills by crashing into the brown crabs and extensively using cluster bombs on the worms and yellow scorpions.
Woom (the final boss) dies in a very anticlimactic way. I kill him before he even spawns completely. The last few frames of the movie consist of me backing my ship up so I don’t run into him and die.
Enjoy the groovy porno music as my friends and I escape. Yes, even the ending lags. Unfortunately, I get the ‘bad’ ending since I used a level-select code and the game thinks I cheated.

NesVideoAgent: Hi! I am a robot. I took a few screenshots of this movie and placed them here. Oh! I also corrected the ROM name. 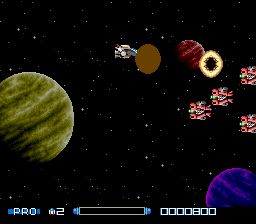 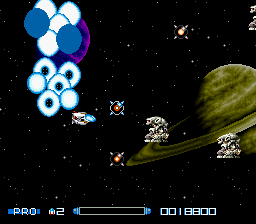 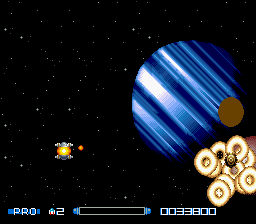 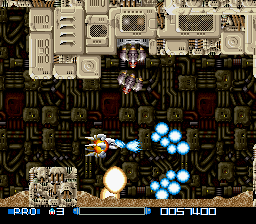 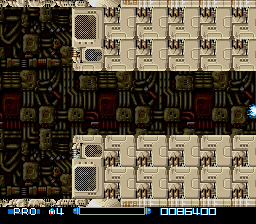 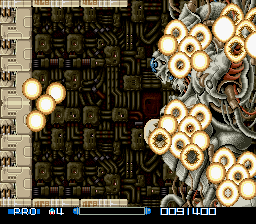 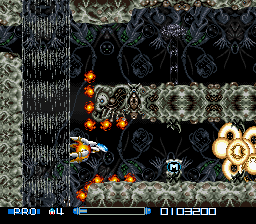 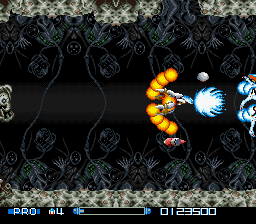 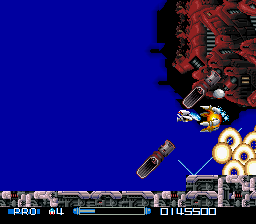 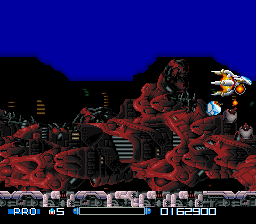 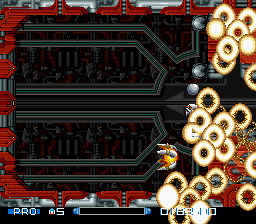 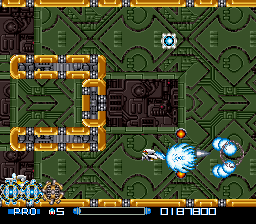 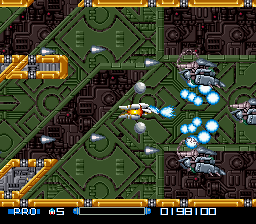 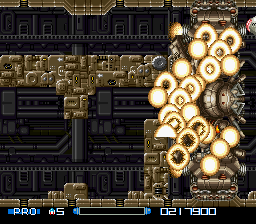 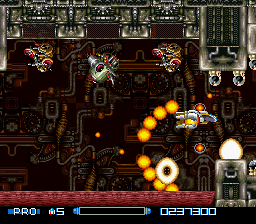 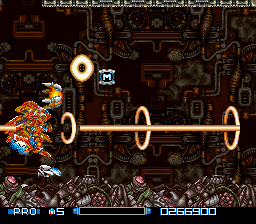 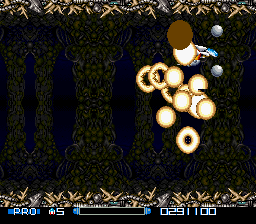 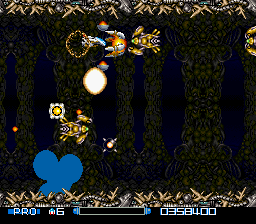 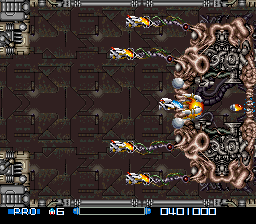