: adelikat : Brandon
Submitted by GeminiSaint on 8/4/2008 9:24:14 PM
Download Discuss and Vote Back to Queue All by this submitter


(Link to video)
This is Chack'n Pop done fast. See below for more info.

Chack'n Pop is a classic game by Taito, and it's historically significant because it is the direct predecessor of the much more popular Bubble Bobble game series. This game was originally released in 1983 for the arcades, and it was ported to several systems of that era. This is the NES (or rather Famicom) version of the game. It's a fun little game, and it's really old-school! :D

The Famicom certainly had the power to run an 1:1 faithful port of the original arcade game. However, since it was released so early in the Famicom's life, this version suffered for the natural inexperience of the programmers who were just learning the then new system. So, besides some minor graphical differences, the NES version lacks the intro, mid-game and ending cutscenes of the arcade version, plus it only has 9 levels (that's 5 levels less than in the original arcade game). Game controls and playability are intact, though.

For starters, Chack'n Pop is more of a maze game (like Pac Man) than it is a platform game (like Bubble Bobble). So, controls are rather limited, and might even seem somewhat unorthodox and even unintuitive if you aren't familiarized with this game:
The goal of the game is to make it to the upper part of the screen (labeled "exit") before the time runs out. However, the exit is always blocked by usually two blocks that only go away when you release the caged hearts in the level.

Here I'm trying my best at finishing the nine levels as fast as possible. And I believe I was successful. From around level 3 on, enemies become such an annoyance with their hard-to-predict patterns and tendency to be in the worst places (like right in the goal!). Manipulating them is, hands down, the hardest part when TASing this game. It might be theoretically possible to complete the game a couple of seconds faster, yes, but so much randomness goes into the enemy behavior that you can't possibly ever be sure you made it the fastest possible. That said, I think I managed to manipulate them reasonably well, especially in the last levels, which are nightmarish under normal circumstances. Oh, by the way, after clearing level 9, the game starts over from level 1, (but the numeration is kept, so level 1 appears as "level 10" and so on). This movie finishes on the first frame level 10 is rendered on screen.
Note: Bonus count after clearing a level always lasts 255 frames, regardless of the amount of bonus received or lack thereof.
NesVideoAgent: Hi! I am a robot. I took a few screenshots of this movie and placed them here. Oh! I also corrected the ROM name. 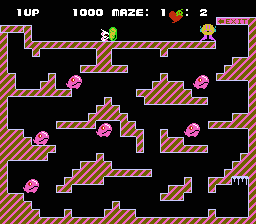 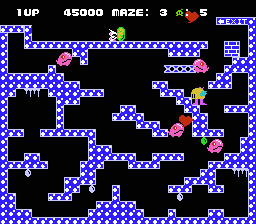 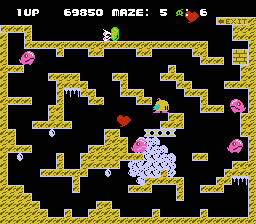 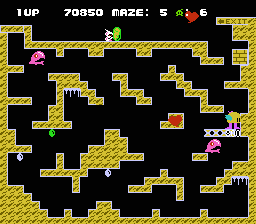 adelikat: The viewer response has been poor. Seems to be a poor game choice, rejecting.
adelikat: Accepting for publication to the Vault
Last Edited by Brandon on 11/9/2012 2:48 PM
Page History Latest diff List Referrers