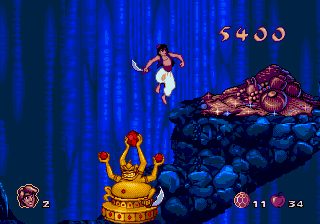 Watch
Disney's Aladdin is a platform game based on the 1992 film of the same name developed by Virgin Games USA. The game was released by Sega for the Sega Genesis on November 11, 1993 as one of several games based on the film, including another game that was released in the same month by Capcom for the Super NES.
The game is one of the best-selling Genesis games with four million copies sold. It also received a number of adapted ports for other platforms, such as the NES, Game Boy, Amiga, and DOS computers.
This is a 00:34.44 second improvement over Flip's previous run. The improvement comes from new tricks and better optimization.
The baseline tab shows the default movie beating the game as fast as possible without any special conditions.