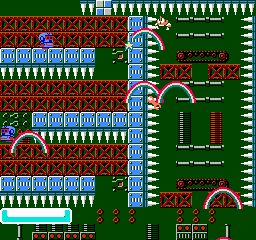 Watch Download (.fm2)
Author notes Discuss
5.19 / 10 Votes: 9
Rainbow Islands is a sequel to Bubble Bobble. Protagonists Bubblun and Bobblun now appear in their human forms as Bubby and Bobby. The objective is to climb to the top of each stage in a time limit, while avoiding or destroying various baddies along the way.
The players can summon rainbows which can be used as platforms and weapons. In a TAS, they can be abused greatly to allow dizzying rates of ascent.
This run obtains the bad ending, because it does not collect any of the Big Diamonds used to unlock the secret last level.
Watch this run being played back on a real console.
Published on 11/30/2012 12:00 AM
See full publication history
Game:
Rainbow Islands: The Story of Bubble Bobble 2
Genres:
Platformer

Emulator Version:
FCEU 0.98.26
Webmasters, please don't link directly to the files. Link to this page or the front page instead.
Republication of movies from this site is only allowed under the following conditions:
Do not label them with speculations. If unsure, ask the site staff for details.