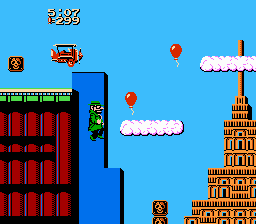 Watch Download (.fm2)
Author notes Discuss
4.12 / 10 Votes: 8.5
Gumshoe is a game developed by Yoshio Sakamoto of Nintendo (known for his work on the Metroid games). Using the NES Zapper accessory, shoot the enemies and obstacles in the hero's path or shoot the hero himself to make him jump over them on his way to save his daughter from the Mafia.
Since the game is an autoscroller, highness aims for maximum kills and score instead of time.
Due to regular flashing caused by the use of the Zapper and the ending, viewers prone to epileptic seizures are strongly discouraged from watching this movie.
Published on 12/6/2012
See full publication history
Game:
Gumshoe
Genres:
Shooter

Emulator Version:
FCEUX 2.00.02
Webmasters, please don't link directly to the files. Link to this page or the front page instead.
Republication of movies from this site is only allowed under the following conditions:
Do not label them with speculations. If unsure, ask the site staff for details.