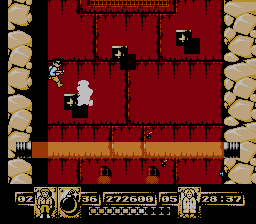 Watch on YouTube
Author notes Discuss
6.65 / 10
James Bond Jr. is a 1991 video game developed by Eurocom. The world’s greatest scientists have mysteriously disappeared! Intelligence reports indicate that James Bond Junior's old enemy, SCUM Lord, has imprisoned them on his island fortress in the Caribbean. Without hesitation, Junior heads out on four dangerous missions to save the scientists and thwart SCUM Lord’s plans!
Here, our brave hero ignores normal elevators, uses all available items and manages their amounts very precisely, and generally abuses his lifebar.
We also have a run of the SNES version.
This movie features the new .FM3 format, intended to be watched in TASEditor, where detailed comments on the run are visible. You can play around with branches included in the movie as well. See the author's explanation on how to use this feature.
Published on 12/13/2012 12:00 AM
See full publication history
Game:
James Bond Jr.
Genres:
Action
Platformer
Shooter

Emulator Replay:
FCEUX 2.1.6 TASEditor
Download (.fm3)
Webmasters, please don't link directly to the files. Link to this page or the front page instead.
Republication of movies from this site is only allowed under the following conditions:
Do not label them with speculations. If unsure, ask the site staff for details.