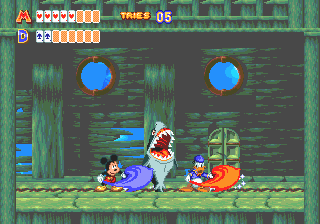 Watch Download (.gmv)
Author notes Discuss
6.93 / 10 Votes: 8
World of Illusion Starring Mickey Mouse and Donald Duck is a platformer where a player controls either Mickey or Donald, or two players can use them together co-operatively. In the game Mickey and Donald are magicians who can turn enemies into harmless objects with the flourish of their capes. Defeating bosses unlocks new spells, like a flying carpet and underwater breathing.
In this run Mitjitsu uses both characters at once. A number of jumping glitches are possible. Frame perfect jumps off springs can get to triple normal height. At the end of the cape flourish animation the game briefly assumes the player is on the ground. This can't be used to jump, but the other character can jump off their head.
Published on 12/17/2012
See full publication history
Game:
World of Illusion Starring Mickey Mouse and Donald Duck
Genres:
Platform