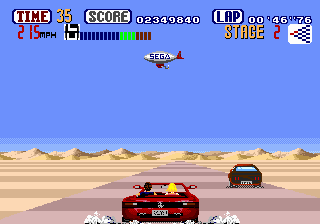 Watch Download (.gmv)
Author notes Discuss
5.36 / 10 Votes: 8
Outrun is a racing game where the player is presented with forks in the road. The left fork leads to an easier stage and the right fork leads to something more challenging. The camera travels along with the car rather than just presenting a birds eye view. Its designer, Yu Suzuki, describes it as a driving game rather than a racing game.
In this run weatherton uses a couple of tricks to speed things up. By quickly switching between high and low gear driving-off road is possible without slowing down. While using this trick the car stays a fixed distance from the road, making impossibly tight turns possible. The position, type and number of cars and the position of obstacles can be manipulated by horizontal position and the frame they load on. Proper timing of the accelerator allows for a turbo start. And revving a few frames before that adds a little bit more.
Published on 12/20/2012
See full publication history
Game:
OutRun
Genres:
Racing