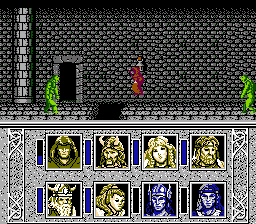 Watch
Dragons of Flame is the sequel that was promised in the credits of the infamous AD&D: Heroes of the Lance. While the game was better received than its predecessor, it was still limited to a Famicom release on Nintendo systems.
The game follows the party from Heroes of the Lance after they recovered the discs of Mishakal, until they slay the 'Dragon Highlord of the North', Lord Verminaard. The gameplay can best be described as a poor man's version of Zelda II for the NES.
The baseline tab shows the default movie beating the game as fast as possible without any special conditions.