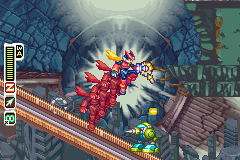 Watch
Zero has a new body which he does all the same old stuff with. Once again, it's on the Game Boy Advance. As with the other games in the series, there is a delay with every hit of the Z-Saber, so many enemies are killed in other ways. (In particular, in this game, Zero can pick up guns from some enemies and use them for added variety.)
This run is almost 4 minutes and 20 seconds faster than the previous movie, in spite of having over 30 seconds more text due to game version differences. A large part of this improvement is due to new combos. Also, the invulnerability times of midbosses are abused even further with midair wobbling of the Z-Saber or the Z-Knuckles. For more details, see the run's comments.
The baseline tab shows the default movie beating the game as fast as possible without any special conditions.