This page documents information about Mega Man Zero 3, Mega Man Zero 2, Mega Man Zero, Mega Man Zero 4, Mega Man Zero Collection. Many of the tricks demonstrated here are near impossible in real time and documented for the purposes of creating Tool-assisted Speedruns.
The purpose of this page is to document all the known tricks of the GBA Mega Man Zero games so far.
Because of the nature of this site, we concentrate here on tricks that are nearly impossible to perform in real play, but are useful in the making of tool-assisted speedruns. For most of the tricks, a frame advance feature in an emulator is a definite must-have.
Note: "Zero" on this page refers to the player character Zero, unless the context clearly indicates otherwise.
Table of contents
TODO
Currently Published Movies 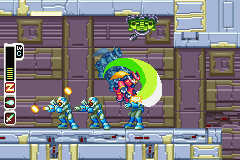 Watch on YouTube
Author notes Discuss
7.66 / 10
Published on 7/19/2011
This is the first Mega Man Zero game in the series for the Game Boy Advance. Unlike most other Mega Man games, Zero really is not in the mood for fighting all the bad guys, and decides to call it quits in the first few missions so that he can skip ahead to the last stages.
This run beats the previous run by 00:04.57 seconds due to a new trick called the "spike jump" which allows Zero to climb on the spikes without taking damage.
If you liked this movie, be sure to check out the all stages run.
Obsoletes:
GBA Mega Man Zero by hellagels in 16:56.98 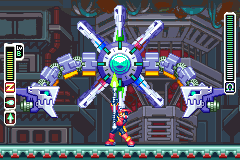 Watch on YouTube
Author notes Discuss
8.43 / 10
Published on 5/24/2017
After a long hibernation meant to purge his body of the Wily Virus, Zero is awakened to save Ciel and the resistance. Zero decides to help, but what he really wants is to have some slashing fun.
Unlike the other run of this game, this run doesn't use mission skips, which means that the author had to beat every mission as fast as possible.
This run from Flameberger improves the previous movie by 00:35.93 seconds.
Obsoletes:
GBA Mega Man Zero "all stages" by Rolanmen1 in 34:09.83

Taking damage to save time

Usually, damage animation interrupts and overrides Zero's current animation being played. As long as the damage animation is shorter than that interrupted, it is a time-saver because you can deliver a second attack or another move sooner.
This is a common trick in many games.

In many games, damage causes the player character to become invincible for a short time, even to spikes.
While by now this is nothing special, there are situations in the Mega Man Zero series where using this can save you from having to acquire certain equipment in order to reach an item or take a shortcut. You can also climb spiked shafts rapidly without using platforms if there are enemies around.
However, invincibility doesn't protect Zero from death from entering solid ground. (See also Getting killed counterintuitively.)

A rarely necessary trick, when Zero is damaged, Zero is forced to move away from the source of the damage, even if there is a game event during which Zero is incontrollable.
This has been useful in MMZ4, where you can defeat the boss in Area Zero with ground attacks from one of the top platforms in the room, receive damage from its attack at the same time, and afterward fall off the platform during the immobile period, to save time.

If you insert a weapon into a slot where a different weapon being charged, the status of the charging progress of the replaced weapon will be inherited by the inserted weapon. This allows firing two charged shots or slashes one after another with the same weapon.

If two or more of Zero's attacks of the same attack level (there is only one attack level in MMZ1) contact a enemy that does not have boss-typed invincibility period, they will alternately damage the enemy every frame they keep contacting it.

For some reason, the hot metal ladles seen in levels use some "attack" to inflict damage to Zero upon contact, which is very blockable with Zero's shield from the left and right sides. Thus as long as the shield is being held, Zero can touch, slip or jump on the sides of the ladles without taking damage.

A thrown charged shields keeps returning to Zero as long as Zero keeps away from it. Since Zero can move faster than the shield, it can be abused to hit enemies around as long as possible. However, with careful positioning, you can let the shield just encircle Zero standing still. This is useful if you want to keep the charged shield on alert throughout a dialogue or a scripted event during which Zero cannot move.

Chain Rod can be used to attach to and drag items. For some reason, every time its tip hits an item, Zero receives one point of Chain Rod EXP. This can help level up Chain Rod skill very quickly.

Zipping through floors or ceilings with Chain Rod (MMZ2)

Skipping intros with a button combination

For some reason, you can quickly skip all intro screens before the title screen with the start button in Japan versions of all MMZ games, while you can't do the same thing in other versions. Anyhow, you can use a game restart sequence (A+B+Start+Select) at the first logo screen (MMZ1-3) or the second one (MMZ4) to skip to the title screen.
TODO: Exact frames.

Skipping boss fights, but being unable to complete the game (MMZ1)

In Neo Arcadia Shrine, you can jump up the roofs of all of the "temples" and skip everything including the bosses inside them. If you skip any boss fight this way, all of the later bosses will disappear from their rooms, because the scripts of entering the fights will not be triggered. You can keep going onto Neo Arcadia Tower and meet Ciel[1], but you cannot save the game with her. This glitched journey ends in the room right after Ciel, as none of its exits will open once you have entered it.
[1] If you are playing the USA version of MMZ1, Ciel's dialogue will now be in Japanese. (TODO: What happens in the Japanese version?)

TODO: There could be a few of them to be listed here lately.

Although currently not useful in a speedrun, these glitches may lead to some new tricks or exploits in future.

Touching spikes without being damaged or dying

When you stand close enough to vertically stretching spikes, you can dash into them and get repelled without being damaged or dying.

Thanks to how detection of collision works, Zero may enter corners unintentionally, and even gets killed being stuck in them for too long (TODO: how long?). This is likely to happen under certain situations:
TODO: More of such things?