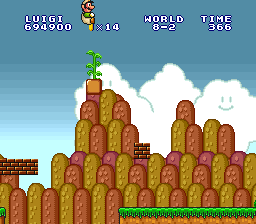 Watch Download (.bkm)
Author notes Discuss
8.33 / 10 Votes: 11
The Lost Levels is a remake of the game released in Japan as Super Mario Bros 2. It introduces a number of new obstacles into the standard Super Mario Bros. formula, including poisonous mushrooms, wind, reverse warp zones, and of course many tricky jumps. It's difficult enough that Nintendo of America decided to completely re-theme a different game and release that as Super Mario Bros. 2 instead; The Lost Levels is the first time the Japanese sequel was released to the rest of the world.
This TAS uses Mario's brother Luigi. He jumps higher than Mario, but acts slower in many ways. However, the movie is in no way worse than the Mario version - some new creative solutions have been found.
This is a warpless version. For a warped one see [2210]FDS Super Mario Bros. 2 "warps, Luigi" by HappyLee, KFCMARIO in 08:13.77.
Watch this TAS be played back on a real SNES.
Published on 7/16/2013
See full publication history
Game:
Super Mario All-Stars: The Lost Levels
Genres:
Platform

Emulator Version:
BizHawk-1.4.0
Webmasters, please don't link directly to the files. Link to this page or the front page instead.
Republication of movies from this site is only allowed under the following conditions:
Do not label them with speculations. If unsure, ask the site staff for details.