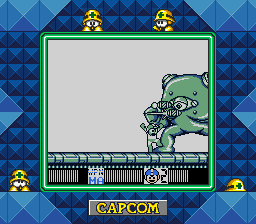 Watch Download (.vbm)
Author notes Discuss
7.93 / 10 Votes: 8.5
This is the final installment of classic Mega Man games on the Game Boy, and the first Super Game Boy Mega Man game. Unlike the four earlier Game Boy games which copied a lot from their NES counterparts, Mega Man V has all new enemies and bosses: you fight the Stardroids, robots from outer space named after the planets of the solar system (note that Pluto was considered a planet at the time). Unlike every other classic Mega Man game, Dr. Wily is not the final boss and our hero uses the Mega Arm instead of the Mega Buster.
In this run, Noxxa beats the entire game in the time it takes an average player to just play through the final level, which coincidentally is the longest level featured in a Mega Man game. Watch as Mega Man fires weapons with superhuman precision, setting up enemies to commit suicide before they know it. See him defeat bosses with repeated blasts quicker than the game supposedly allows for, and even skip one boss phase!
We recommend reading the author's comments to appreciate all the planning and techniques used to exploit the game.
Published on 8/1/2013
See full publication history
Game:
Mega Man V
Genres:
Action
Platform

Emulator Version:
VBA-RR v23.5 svn394
Webmasters, please don't link directly to the files. Link to this page or the front page instead.
Republication of movies from this site is only allowed under the following conditions:
Do not label them with speculations. If unsure, ask the site staff for details.