(Link to video)
adelikat
Another famtasia movie bites the dust!
Note the sha1 of the disksys.rom FDS bios used is: 57FE1BDEE955BB48D357E463CCBF129496930B62
As always, I have provided a release package on my SVN. It includes the movie file, submission text, screenshots, a spreadsheet, and a lua script.
Important! This movie must be played on FCEUX2.1.2or later. Prior versions do not support the recording of disk ejecting/switching inserting.
Watch on Dailymotion

This is an improvement over the current published movie by BagofMagicFood. Due to better emulation over famtasia this movie is actually 2665 (~44.3 seconds) frames slower than the published movie.
I don't know the exact amount that this movie improves the published movie due to several factors such as emulation differences and the lack fo a frame counter in famtasia. In addition, I have no idea the numbers or names of any of the rooms so I dont' have a specific location of improvements. Here is a list of the most significant improvements. And if it wasn't confusing enough, famtasia's fps is 60, where FCEUX is ~60.1 resulting in even more disparity between reported times.
In addition, there are various 1-2 frame improvements here and there due to having frame advance precision compared to the published movie. Such improvements are rather mundane for a game like this so I didn't keep track of them.

Famtasia improperly emulated FDS disk load times. As a result, every loading screen in the published movie was ~122-124 frames faster than it should have been. This submission is slower, but reflect better emulation accuracy.
In summary, regardless of reported times, this is a small improvement over the published movie. In addition, it is done with a modern emulator that features better emulation quality.

This movie (as well as the previous movie ) exploits an egg glitch that allows lolo to warp to another part of a screen (or another screen) by shooting an egg that he is on while it is going into water.
It also features a death shortcut to make lolo appear on a different part of the screen. 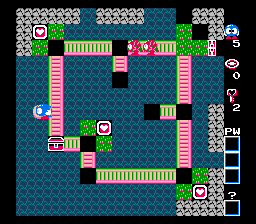 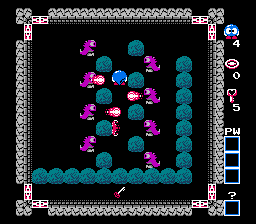 (Note to publishers, these are already optimized)

Thanks to BagofMagicFood for a very optimized movie (especially with famtasia!) and for assistance in making this movie.

Baxter: One step closer to ridding the world (err, TASVideos) of Famtasia movies. Accepting as an improvement to the published run.
adelikat: Processing.
Last Edited by adelikat on 1/13/2022 4:09 AM
Page History Latest diff List Referrers