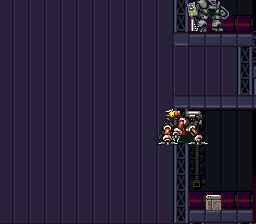 Watch Download (.bkm)
Author notes Discuss
7.33 / 10 Votes: 7
Metal Warriors is a battlemech action game with platforming elements, similar to Cybernator in concept. The game's distinctive feature is the ability to pilot six different mechs, which vary considerably in gameplay style. Each of these mechs is equipped with its own melee weapons, firearms, and shields. The mechs also have different movement capabilities: for instance, one can roll as a ball, another can walk on walls and ceilings, and one is an agile flier.
In addition, the player can eject from their mech and fly using a jetpack. Although they are extremely vulnerable in this form, the player needs to be out of the mech to accomplish certain objectives, such as activating switches.
In this run, Dooty shoots, stomps, and crashes his way through the missions, using smooth tool-assisted movement and a few glitches to defeat the Dark Axis in under 15 minutes.
Published on 9/9/2013
See full publication history
Game:
Metal Warriors
Genres:
Action
Platform

Emulator Version:
BizHawk 1.5.1
Webmasters, please don't link directly to the files. Link to this page or the front page instead.
Republication of movies from this site is only allowed under the following conditions:
Do not label them with speculations. If unsure, ask the site staff for details.