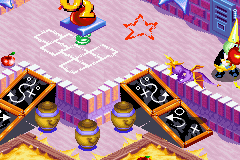 Watch Download (.vbm)
Author notes Discuss
6.87 / 10 Votes: 3
Spyro: Attack of the Rhynocs, known as Spyro Adventure in Europe, is an isometric platform game in the Spyro the Dragon series. One of the Professor's inventions has inadvertently torn a large hole in the fabric of space and time, creating a portal between the Rhynoc Lands and the Dragon Realms. Naturally, Ripto takes full advantage of this by sending his armies of rhynocs through the portal to wreak havoc. Spyro must find somehow find a way to close the portal before Ripto succeeds in taking over the Dragon Realms.
In this run, EgxHB zips through the game, using precision and a few tricks to take down Ripto in a little under 19 minutes.
Published on 10/3/2013
See full publication history
Game:
Spyro: Attack of the Rhynocs
Genres:
Platform

Emulator Version:
VBA-rr-v24-svn422
Webmasters, please don't link directly to the files. Link to this page or the front page instead.
Republication of movies from this site is only allowed under the following conditions:
Do not label them with speculations. If unsure, ask the site staff for details.