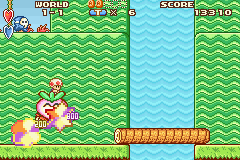 Watch Niconico Watch YouTube
Author notes Discuss
7.56 / 10
Super Mario Advance is a remake of Super Mario Bros. 2 and Mario Bros. together on one cartridge. It features all the running, jumping, and veggie-flinging from the original Super Mario Bros. 2, plus new enemies and bigger items (and some annoying voice clips). In the updated arcade classic Mario Bros., you can play alone or against another player as you bump off baddies and collect coins.
There's another very important difference between this version of Super Mario Bros. 2 and the NES version: when loading a savefile in this game, the player can travel back to any stage before the last one visited. This makes several new routes available through the game which involve warping forward and then going back to a previous stage with a different warp.
This run plays through the game as fast as possible, usually taking advantage of Toad's speed and Luigi's jumping. (In this version of the game, Toad does not get a speed boost from carrying enemies or items.) For a version that only uses Princess Peach, see this run.
Runs for the NES version and SNES version are available, as well.
Published on 11/13/2013 12:00 AM
See full publication history
Game:
Super Mario Advance
Genres:
Platformer

Emulator Replay:
VBA-RR v24 svn422
Download (.vbm)
Webmasters, please don't link directly to the files. Link to this page or the front page instead.
Republication of movies from this site is only allowed under the following conditions:
Do not label them with speculations. If unsure, ask the site staff for details.