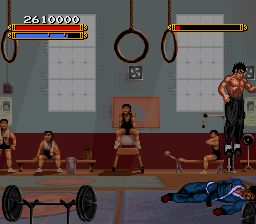 Watch Download (.bkm)
Author notes Discuss
4.2 / 10 Votes: 7
Dragon: The Bruce Lee Story is a action/fighting game in which you play Bruce Lee, the infamous martial arts master.
As you go through the different levels, the game follows the format of the 1993 Universal movie of the same name, but is not identical to it.
As Bruce Lee, you can perform a wide variety of high-flying martial arts moves, roundhouse kicks, flying kicks, flying chops and throws. Defeat a multitude of new opponents and build up your Chi in order to gain special abilities and weapons.
Published on 3/25/2014
See full publication history
Game:
Dragon: The Bruce Lee Story
Genres:
Fighting

Emulator Version:
Bizhawk 1.6.0
Webmasters, please don't link directly to the files. Link to this page or the front page instead.
Republication of movies from this site is only allowed under the following conditions:
Do not label them with speculations. If unsure, ask the site staff for details.