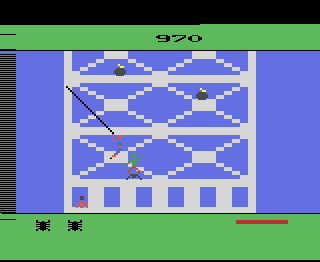 Watch Download (.bkm)
Author notes Discuss
4.69 / 10 Votes: 15
Spider-Man was the first game to feature the famous hero and also the first Marvel Comics-based video game. Here, Spider-Man must use his web shooters to scale a building and defuse bombs set atop it by the Green Goblin.
Watch as Noxxa climbs the colorful buildings with ease and saves the day in just over three minutes.
Note: While this movie does obsolete one that's nine times shorter, that run only played through one level, while this one plays all six.
Published on 5/16/2014
Obsoletes:
A2600 Spider-Man by Noxxa in 00:19.62

Emulator Version:
BizHawk v1.6.1
Webmasters, please don't link directly to the files. Link to this page or the front page instead.
Republication of movies from this site is only allowed under the following conditions:
Do not label them with speculations. If unsure, ask the site staff for details.