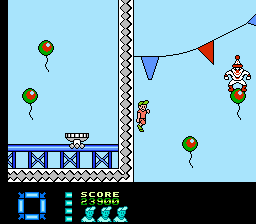 Watch Download (.fm2)
Author notes Discuss
7.19 / 10 Votes: 8
Treasure Master is a side-scrolling action game that sends your character on a quest of treasure acquisition. Jump your way through a variety of world environments including the islands, microprocessor-level circuitry, and the moon, and accumulate all of the material wealth you can possibly amass. You have a number of enemies to beware of (such as sharks, caterpillars, and springs). But you also have an impressive array of tools to help you in your quest (moon buggy!).
Treasure Master offers the opportunity to collect not only virtual treasure in a video game, but also treasure in the real world. After practicing the game, players had the opportunity to compete for real prizes.
Spoiler: Hover over the screenshot.
Published on 7/10/2014
See full publication history
Game:
Treasure Master
Genres:
Action
Platform