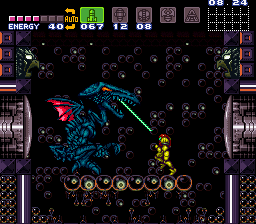 Watch
Super Metroid Y-Faster is a Super Metroid ROM hack made for a MetFest Summer contest known as "Race to the Finish".
The plot goes like this: A flying brain from another dimension is wrecking the galaxy, and Samus has decided to put an end to it. She has less than one hour to complete her task, otherwise she'll die from damage to her own brain.
This TAS by Hoandjzj speeds through the world while collecting 100% of items in record time.