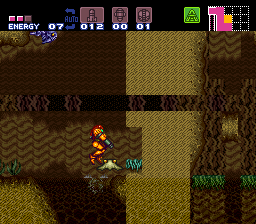 Hacks of this game can be found in the Super Metroid hacks game group.

Watch
Super Metroid is a platform game and a follow-up to Metroid II. Like the previous games in the series, it is not divided into separate levels; the planet Zebes is an open world which Samus traverses back and forth. This world is divided into rooms separated with doors which must be shot to be opened. Shooting is also used to open up secret passages, some of which contain nifty bonuses, but finding most of them is required to proceed in the game.
This run not only beats the previous any% but also obsoletes the previous reverse boss order TAS due to similar routes. This is an improvement of 1:40.95 over the predecessor movie. As well as an improvement over the reverse boss order TAS by 10:40.51.
Sniq makes short work of Mother Brain and her space pirates, largely due to a major route change. Please read the author's submission notes for more information.
Every second encode link leads to a version where all graphics have been fixed. 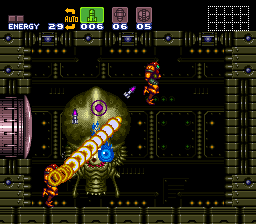 Watch
At the end of Metroid II: Return of Samus, there is but one Metroid left in the universe. Bad things happen, and Samus Aran must once again head for Planet Zebes to battle Mother Brain, Ridley, and the Space Pirates. (And a few other bosses too.)
This movie improves on both prior low% runs (one that collects the Ice Beam and one that collects the Speed Booster) by collecting the Speed Booster and using various Shinespark-related glitches to render the Gravity Suit unnecessary, pushing the total required number of items from 14 down to 13. The author's comments are very detailed, and well worth a read if you're curious about just how everything was done.
There are a number of other routes that can be taken while still getting 13 items, but all of those routes require a specific glitch when fighting Draygon which gives you a non-infinite but arbitrarily large amount of ammunition; the item route in this movie does not permit the use of this glitch. If you would like to see this glitch, it is featured in the following (now-obsoleted) iteration of the any% run. 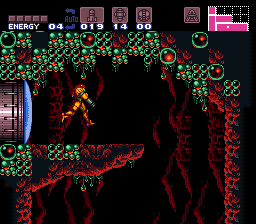 Watch
In accordance with standard procedure, Samus discarded all of the items she collected on previous adventures before embarking on this one.
Super Metroid has a wide variety of time-saving glitches to exploit, many of which are explained on the Super Metroid Tricks page. Be sure to check it, as well as the author's comments, for more information on the improvements. This is an improvement of 6:28.70 over the predecessor movie.
If you prefer to watch the fastest completion without getting all the items and without any large skip glitches, check out Super Metroid in 35:58 by Sniq.
Every second encode link leads to a version where all graphics have been fixed. 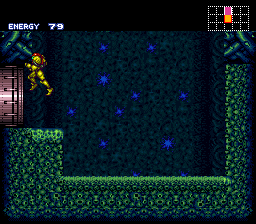 Watch
Super Metroid made waves upon its release in 1994 for having a large continuous world open for nearly completely unguided exploration and a vast assortment of movement- and power-enhancing item upgrades hidden throughout.
Having transcended the need for all of that collection and exploration, Sniq immediately goes out of bounds to manipulate stray RAM data and force the ending sequence directly—within just a couple minutes from landing on the planet. As a result, no items are ever collected.
The improvement over the previous run in this category comes from a more optimal ACE setup. See the author's submission notes for more information.
The baseline tab shows the default movie beating the game as fast as possible without any special conditions.