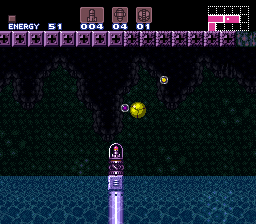 Watch on YouTube
Author notes Discuss
6.87 / 10
Super Metroid is a game that requires very little introduction. Samus Aran, a bounty hunter, returns to the planet of Zebes, in order to explore its depths, and defeat Mother Brain and the Space Pirates.
In this run, Saturn completes the game with the minimal amount of items, without skipping bosses or major glitches, which was considered "legit conditions" by the community. This movie had a notable flame war about its acceptability, see the discussion thread. Its submission also was revived and rerejected several times in a row.
Published on 12/10/2012 12:00 AM
Obsoletes:
SNES Super Metroid "low%, Ice Beam" by Terimakasih in 51:05.75