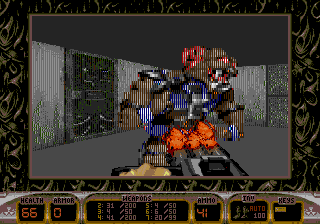 Watch Download (.gmv)
Author notes Discuss
5.25 / 10 Votes: 9
This version of Duke Nukem 3D was released exclusively in Brazil. The gameplay is fundamentally the same and has the player blasting invading aliens from Duke's point of view. It consists of nine levels based on the PC's Lunar Apocalypse episode and a range of enemies and weapons from the original game. The difficulty has been raised significantly, and the framerate is noticeably reduced. The port also makes heavy use of scanlines and a smaller window size to reduce the overall render load.
Dimon12321 follows the fastest path through each of the maps, and moves extra quickly by running and strafing at the same time.
Published on 10/11/2014 12:00 AM
See full publication history
Game:
Duke Nukem 3D
Genres:
Shooter

Emulator Version:
GENS 11A
Webmasters, please don't link directly to the files. Link to this page or the front page instead.
Republication of movies from this site is only allowed under the following conditions:
Do not label them with speculations. If unsure, ask the site staff for details.