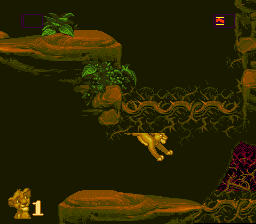 Watch on YouTube
Author notes Discuss
7.43 / 10
The Lion King, based on the famous Disney movie, is a platform game where you control Simba - initially as a young cub, and later as an adult lion. The plot of the game follows the plot of the movie. Each of the levels represents a part of the movie.
Watch as Tompa climbs walls, clones hyenas, and sticks his face in lava in order to beat this difficult game in a brisk 13 minutes.
For a TAS of the slightly different Genesis port, look no further than here.
Published on 11/22/2014 12:00 AM
See full publication history
Game:
The Lion King
Genres:
Platformer

Emulator Replay:
Bizhawk 1.7.4
Download (.bk2)
Webmasters, please don't link directly to the files. Link to this page or the front page instead.
Republication of movies from this site is only allowed under the following conditions:
Do not label them with speculations. If unsure, ask the site staff for details.