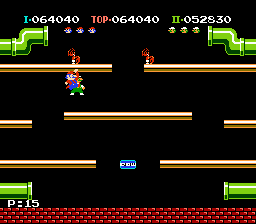 Watch Download (.fm2)
Author notes Discuss
6.09 / 10 Votes: 16
Mario and Luigi, the best plumbers in the world, have a real job on their hands. A host of characters have taken over the sewers, and the brothers must clear them out of the pipes.
The platform puzzle which first introduced Luigi to the world has both single and multiplayer action with two differing game types. Crabs, turtles and fighter flies must be cleared out by jumping underneath the platform they're on, then kicking them away. Each level is cleared when all of the enemies are defeated.
This time around, Spikestuff plays on the American version, as it has fewer phases and also has a pause bug not present in the European version, which allows Mario and Luigi to pass through floors. This is especially useful in the Test Your Skill stages, and allows for a faster completion of them. Like in the European version, the Bros.' potential for both hilarious antics and impressive teamwork is nicely demonstrated here.
Published on 12/9/2014
See full publication history
Game:
Mario Bros.
Genres:
Action
Platform