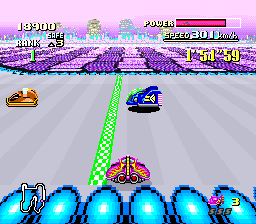 Watch
F-Zero is a futuristic racing video game developed by Nintendo EAD and published by Nintendo for the SNES in 1990.
The game is normally played by selecting one of three leagues, known as Knight, Queen, and King leagues. This TAS plays through all three leagues. Each race, aside from the final ones in each league, are finished after entering in 2nd place to skip the winning animation, because of this, there is an alternate encode provided that shows each race ending in 1st place, to achieve the fastest in game time.
A Twitch commentary stream, with nymx and Worsel, can be viewed via the following link: https://www.twitch.tv/videos/1438037569
The baseline tab shows the default movie beating the game as fast as possible without any special conditions.