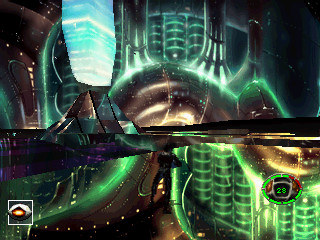 Watch on YouTube
Author notes Discuss
6.41 / 10
In this 3D shoot 'em up, you play Kurt Hectic, and your job is to save the world. Aliens have sent 8 giant fortresses to destroy earth. You run and jump through 6 missions of strange 3D worlds and kill the "Stream Riders" with your machine gun arm. Precise platform jumps are part of the challenge, and there are occasional puzzles where you destroy objects in sequence in order to proceed.
Kurt is equipped with a special battle suit with an included parachute and a sniper interface (allowing precise shooting) embedded in your helmet. Sniper ammo is maintained separately from regular ammo, and some challenges in the game require you to snipe targets. Some powerups are necessary to proceed, such as the World's Smallest Nuclear Explosion (to blast open special doors) and mortars (fired via the sniper system).
Due to emulation issues, there is no music in this run.
Published on 1/30/2015 12:00 AM
See full publication history
Game:
MDK
Genres:
Action
Shooter

Emulator Replay:
PSXjin v2.0.2
Download (.pjm)
Webmasters, please don't link directly to the files. Link to this page or the front page instead.
Republication of movies from this site is only allowed under the following conditions:
Do not label them with speculations. If unsure, ask the site staff for details.