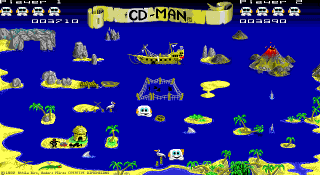 CD-Man is a Pac-Man clone first released in 1989, then updated to Version 2.0 in 1992. The game speed options range from the really slow "Zzzzz..." to the mind-numbingly fast "Warp". Five levels are present in Version 2.0 of the game, unlike the original version, which ended at level 3.
Author c-square controls two characters simultaneously at the highest speed setting and clears the 5 levels twice in 3.71 seconds, making it one of the fastest published TASes on this site.
Due to the sheer speed of the game, slowed down encodes are available. One is at 16.7% of the regular speed, while another is at 10% of the regular speed.
Published on 2/23/2015
See full publication history
Game:
CD-Man Version 2.0
Genres:
Action

Emulator Version:
JPC-rr 11.2
Webmasters, please don't link directly to the files. Link to this page or the front page instead.
Republication of movies from this site is only allowed under the following conditions:
Do not label them with speculations. If unsure, ask the site staff for details.