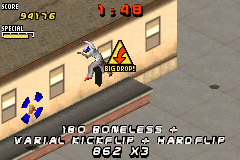 Watch Download (.bk2)
Author notes Discuss
6.75 / 10 Votes: 15.5
The Tony Hawk skateboarding series makes its debut on the Game Boy Advance with this adaptation of the second Pro Skater game.
Gameplay is similar to the original console game. The levels have been adapted from the console version for the two dimensional isometric perspective; one is even taken from the original Tony Hawk's Pro Skater.
In this run, TaylorTotFTW improves upon the of previous run by Noodlez by 02:01.74, using a completely different route and much more optimized movement.
Published on 5/8/2015
Obsoletes:
GBA Tony Hawk's Pro Skater 2 by Noodlez in 05:03.82

Emulator Version:
BizHawk 1.9.4
Webmasters, please don't link directly to the files. Link to this page or the front page instead.
Republication of movies from this site is only allowed under the following conditions:
Do not label them with speculations. If unsure, ask the site staff for details.