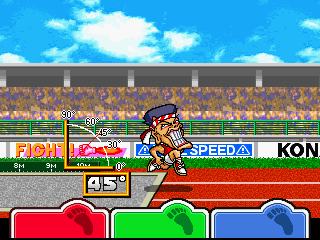 Watch Download (.pjm)
Author notes Discuss
5.37 / 10 Votes: 12.5
Bishi Bashi 3: Step Champ is a conversion of the arcade with the same name. This time around dancing and feet coordination is key to success as this outing is specially made to be played with Konami's Dance Dance Revolution dance mat.
As usual with the Bishi Bashi games, it's full to the brim with random and rather off-beat mini-games that often times pokes fun at Konami's own franchises (such as Track & Field and Beatmania). Most of the mini-games are either of the button mashing variety (such as the mini-game in which the player has to throw a tantrum faster than his siblings to get a toy by stomping his feet on the ground repeatedly), but there are also games where the player has to time which button to press (one such game is very similar to Dance Dance Revolution).
Up to three players can face off against one another to determine who is the ultimate Step Champ.
Published on 5/19/2015
See full publication history
Game:
Bishi Bashi Special 3: Step Champ
Genres:
Action

Emulator Version:
PSXjin v2.0.2 svn0
Webmasters, please don't link directly to the files. Link to this page or the front page instead.
Republication of movies from this site is only allowed under the following conditions:
Do not label them with speculations. If unsure, ask the site staff for details.