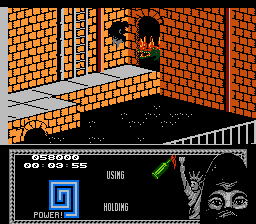 Watch Download (.fm2)
Author notes Discuss
6.08 / 10 Votes: 4
The Last Ninja is a port of System 3's The Last Ninja 2 to the NES. It follows the plot of the original game, namely that Armakuni is mysteriously teleported to modern-age New York City to defeat the evil Kunitoki once again. Notable changes in this port are vastly different music and less graphical detail.
usedpizza runs through the six stages of this game in 8 minutes and 16.76 seconds.
Published on 5/22/2015 12:00 AM
See full publication history
Game:
The Last Ninja
Genres:
Action