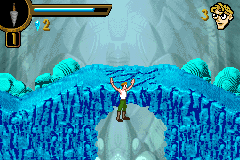 Watch Download (.bk2)
Author notes Discuss
5.99 / 10 Votes: 8
"Atlantis: The Lost Empire" is a platform games based on the 2001 Disney movie. The game follows the story of Milo Thatch, using his knowledge of the Atlantean language to interpret the text of the Shepherd's Journal, joins an epic expedition to discover the titular lost city.
The protagonist must often jump and climb his way through the stages, as well as dispatch of the enemies with explosives and throwing weapons before he can reach the lost city of Atlantis and save it from imminent doom.
Published on 8/24/2015
See full publication history
Game:
Atlantis: The Lost Empire
Genres:
Platform

Emulator Version:
BizHawk 1.9.1
Webmasters, please don't link directly to the files. Link to this page or the front page instead.
Republication of movies from this site is only allowed under the following conditions:
Do not label them with speculations. If unsure, ask the site staff for details.