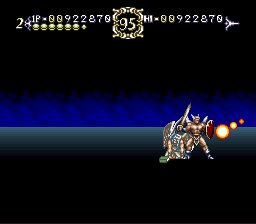 Watch Download (.bk2)
Author notes Discuss
7.07 / 10 Votes: 7
The oft-forgotten sequel to the more popular Actraiser, Actraiser 2 once again sees The Master do battle against Tanzra and his minions. The culmination is The Master ramming down Tanzra's front door with an entire palace to give him a beating during his ice cold bath.
Clocking in at little over a minute and a half faster than the previous TAS, this run features since-then known improvements, new strats figured out during the making of this TAS and optimization here and there.
If you want to see other ActRaiser tool-assisted speedruns, there's one here and another one here.
Published on 9/6/2015
Obsoletes:
SNES ActRaiser 2 by Pasky13 in 40:54.77

Emulator Version:
Bizhawk 1.9.4
Webmasters, please don't link directly to the files. Link to this page or the front page instead.
Republication of movies from this site is only allowed under the following conditions:
Do not label them with speculations. If unsure, ask the site staff for details.