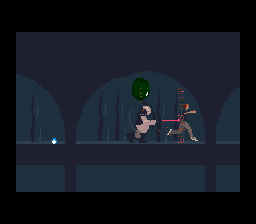 Watch on YouTube
Author notes Discuss
6.69 / 10
Quoting bobucles's analysis of the game:
Oh, this game is great. I remember that at the beginning, the gun has exactly enough shots to make it past that first door. Shield, big blast, and kill the guards, then the gun runs out. Waste any, and you die. Classic.
You really have to play the game to know just how hard it is. As an example, if you don't hold up at that very first water scene, a tentacle drags you down to your death. Those leeches are fatal, the beast takes alot of practice to get past, you have to rattle your cage free, the first gun fight is very tough, the steam in the pipes is fatal, you can drown, spikes, teeth, tentacles, leaps of faith, and tons of gunfights. The colleseum scene is a puzzle in itself– you better hit the buttons in the right order, or you'll get caught. And you better make it to that control panel at the end, or the guard will kill you. Just like the Sierra games of old, there were a million ways you could die, and only one way to survive. It was truley a great adventure game like no other. And the best part is, there weren't any box puzzles! How many adventure games can you say that about?»»
Published on 2/12/2005 12:00 AM
See full publication history
Game:
Out of This World
Genres:
Action
Platformer