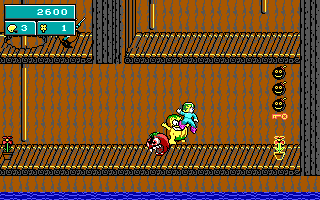 Watch Download (.jrsr)
Author notes Discuss
5.55 / 10 Votes: 13
Initially published as a commercial game between Invasion of the Vorticons and Goodbye, Galaxy! in 1991, Commander Keen: Keen Dreams was largely overlooked until it saw a shareware release in late 1992 almost a year after Goodbye, Galaxy!. It is informally known as Keen 3.5 among fans.
In Keen Dreams, Commander Keen goes to sleep and finds himself in the land of Tuberia, where he discovers that Earth children are being trapped in their sleep to work as slaves for the evil King Boobus Tuber. Out of ammo and lacking his trusty pogo stick, Keen must resort to scavenging Flower Power and Boobus Bombs from the local flora in order to combat the tuberian threat.
slamo improves his previous TAS by 24.98 seconds (~21.22 seconds on RTA timing), thanks to a new route, ditching two long levels (Melon Mines and Spud City) in favor of 4 shorter levels on the southern part of the overworld.
Published on 12/22/2015 12:00 AM
Obsoletes:
DOS Commander Keen: Keen Dreams by slamo in 04:40.12

Emulator Version:
JPC-rr r11.8 rc2
Webmasters, please don't link directly to the files. Link to this page or the front page instead.
Republication of movies from this site is only allowed under the following conditions:
Do not label them with speculations. If unsure, ask the site staff for details.