NES Lupin Sansei: Pandora no Isan by fcxiaopengyou in 10:22.79 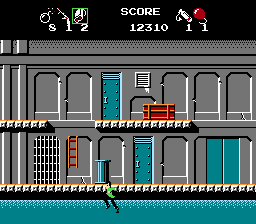 Watch Download (.fm2)
Author notes Discuss
5.63 / 10 Votes: 6
Lupin Sansei: Pandora no Isan (ルパン三世 パンドラの遺産) is an action game, developed by TOSE and published by Namco, which was released in Japan in 1987. It is based on an animation called "Lupin Sansei" that is well-known in Japan. The main character of the series is a well-meaning thief named Arsene Lupin III, based on a comic by Maurice Leblanc in the early 1900s.
Lupin's friend Clarisse was kidnapped, and Lupin Sansei (ルパン三世) decided to rescue her. His companions Daisuke Jigen (次元 大介) and Goemon Ishikawa XIII (十三代目 石川 五ェ門) both wanted to help him. So they went to the villa, Chinatown, dock warehouse and pyramid to beat patron saints. Along the way, they dodge some enemies and solve some puzzles.
TASVideos has two other runs from other games starring Lupin III: Legend of the Gold of Babylon and Castle of Cagliostro.
Published on 3/14/2016
See full publication history
Game:
Lupin Sansei: Pandora no Isan
Genres:
Action