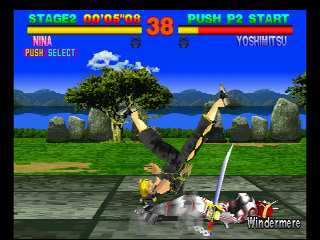 Watch Download (.bk2)
Author notes Discuss
3.83 / 10 Votes: 6
The powerful fighter Heihachi Mishima throws his five-year-old son Kazuya off a cliff, saying that the child will survive the fall if he is truly his son. The fatally wounded boy is approached by the Devil, who offers him his life and a chance to become a fearsome fighter in exchange for his soul. Determined to get even with his father, Kazuya agrees. Twenty-one years later, Heihachi, now the head of a corrupt corporation, organizes a fighting championship his son is eager to join.
Tekken is a versus fighting game developed by Namco, first released in the arcades in 1994, then ported to the PlayStation in 1995. Besides Kazuya, other fighters of the tournament all have their own range of moves, something to prove, and a reason for any combat opponent to fear them. For example, Nina Williams is a trained assassin, Yoshimitsu is a robotic recreation of a ninja, and Marshall Law aims to set up a fighting school to pass on his knowledge.
In a shocking twist, Spikestuff actually uses Nina to complete the game's Arcade mode as fast as possible.
Published on 5/1/2016
See full publication history
Game:
Tekken
Genres:
Fighting