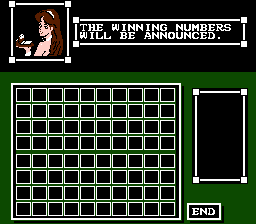 Watch Download (.bk2)
Author notes Discuss
5.82 / 10 Votes: 5
Vegas Dream (1988) is a gambling game by HAL Laboratory, better known these days for Kirby and Super Smash Bros. There are four different casino games to play, with randomly picked social interactions occurring between rounds. It was later followed by Vegas Stakes for the Super Nintendo.
This TAS by TheRealThingy uses extreme luck manipulation to win at Keno, the most difficult game to fully beat in normal play. This earns him enough to where the game automatically hands him the ending.
Published on 5/31/2016 12:00 AM
See full publication history
Game:
Vegas Dream
Genres:
Sport