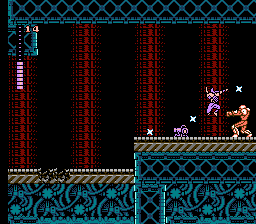 Watch on YouTube
Author notes Discuss
8.72 / 10
In the year 2029, evil Emperor Garuda somehow establishes a dictatorial government in the United States. After many lives are lost, two ninjas attempt to overthrow him.
Shadow of the Ninja is one of the rare games in which constantly jumping and slashing is faster than regular running. The author makes sure to use this move extensively both to travel and to deal damage to enemies, and so it may seem that the ninja has a severe case of ADHD.
This game was released in Europe as Blue Shadow and in Japan as Kage.
TASeditor improves the previous run by 17.91 seconds, thanks to new tricks and better optimisation in many places.
Published on 6/10/2016 12:00 AM
Obsoletes:
NES Shadow of the Ninja "1 player" by klmz in 09:48.32