NES The Bugs Bunny Birthday Blowout by fcxiaopengyou in 25:44.26 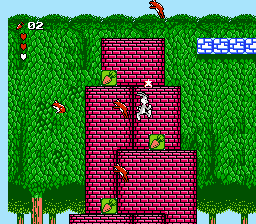 Watch Download (.fm2)
Author notes Discuss
5.92 / 10 Votes: 7
The Bugs Bunny Birthday Blowout, known in Japan as Happy Birthday Bugs and in Europe as The Bugs Bunny Blowout, is a Kemco video game released for the Nintendo Entertainment System. The game is a sequel to The Bugs Bunny Crazy Castle, which was released the previous year. As the beginning of the game tells you, Bugs Bunny is trying to get to his 50th birthday party, and he needs to get past the numerous obstacles and enemies in his way.
Several factors make this game quite difficult. For instance, after taking damage, Bugs cannot swing his hammer until the damage blinking stops. When an enemy is hit with the hammer but doesn't die, he is pushed back a little. These factors make it tricky to coordinate multiple hits on a boss in a row. Also, some of the later stages are quite mazelike with their network of warp entrances (similar to warp pipes in Super Mario Bros). In addition, a TASer needs to manage heavy lag and avoid collecting too many bonus carrots (so that fewer time-wasting bonus games are played after the stages).
fcxiaopengyou improves the previous run by 34.24 seconds, thanks to better optimisation, better lag management and a slightly different route.
Published on 10/31/2016
Obsoletes:
NES The Bugs Bunny Birthday Blowout by Bhezt Rhy in 26:18.50