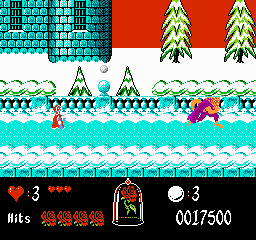 Watch Download (.fm3)
Author notes Discuss
5.63 / 10 Votes: 5
Beauty and the Beast is a typical side-scrolling platform game based on the Disney movie of the same name. The player takes on the role of Beast. As Beast the player can walk around, jump and hit enemies with his fists. Beast can also climb against walls.
The levels feature various power-ups that can be collected (such as hearts which earn the player extra life and a magnifying glass which shows the player an upcoming piece of the level) which can be and on the way the player must watch out for pit traps and various enemies.
In this run, DrD2k9 runs, climbs, and jumps his way throughout the castle in order to win the heart of Belle.
Published on 12/11/2016
See full publication history
Game:
Beauty and the Beast
Genres:
Action
Platform