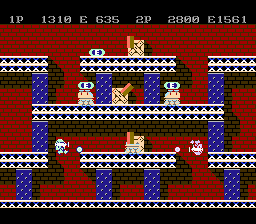 Watch Download (.fm2)
Author notes Discuss
5 / 10 Votes: 5
Astro Robo Sasa is a fast-paced game that was only released in Japan. You are a robot boy named Sasa, who can only move around with the recoil from his plasma gun. You must collect or destroy all energy packs in order to clear each stage, though many must be collected as you have limited energy.
In this run, TaoTao controls two players: Sasa and his girlfriend Nana. By splitting up the work and using some wall zipping, he beats the game in a little under 5 minutes.
Published on 12/25/2016 12:00 AM
See full publication history
Game:
Astro Robo Sasa
Genres:
Action