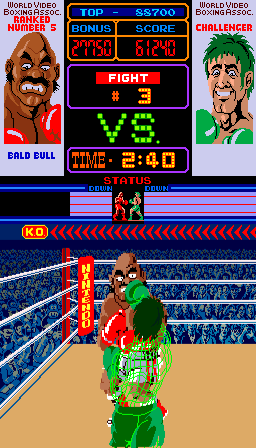 Watch Download (.mar)
Author notes Discuss
6.72 / 10 Votes: 9.5
Punch-Out!! is an arcade game by Nintendo, released in 1983. Back in those carefree days, while Mike Tyson was still a promising amateur, Nintendo was developing a most particular sort of boxing video game. Punch-Out!! features two monitors, digitized speech, and an early (if not the first) example of hardware-scaled sprites.
£e Nécroyeur defeats the six opponents in record time.
This is the first Arcade publication using MAME-RR, and is published right on the 20th anniversary of the original MAME.
Published on 2/5/2017
See full publication history
Game:
Punch-Out!!
Genres:
Sport

Emulator Version:
MAME-RR v0.139 v0.1-alpha
Webmasters, please don't link directly to the files. Link to this page or the front page instead.
Republication of movies from this site is only allowed under the following conditions:
Do not label them with speculations. If unsure, ask the site staff for details.