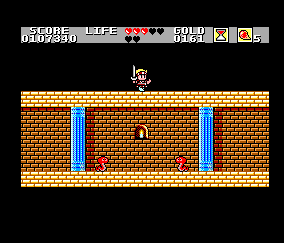 Watch on YouTube
Author notes Discuss
7.12 / 10
Eleven years have gone by since Tom-Tom rescued his girlfriend Tanya from the clutches of the evil King. Word of Tom-Tom's dangerous adventure soon spread throughout Wonder Land. The people were very proud of Tom-Tom and gave him the highest honor of all — the legendary name of Wonder Boy. With the evil King defeated, Wonder Land returned to its peaceful state, and for over a decade, the kingdom was a paradise, and everything and everyone lived happily together.
Eventually, the peace was broken when a ferocious fire-breathing dragon appeared out of nowhere and took over Wonder Land with an army of evil, monsterous henchmen, throwing Wonder Land immediately into utter chaos. The defenseless people were quickly taken over and the tranquil and serene kingdom was transformed into a land of demons and devils. Wonder Land was now a Monster Land. Tom-Tom, Wonder Land's last hope, is now summoned to set out on a journey, destroy this dragon, and restore peace once again.
In this movie, Challenger improved upon the previous publication by 01:46.37 minutes, thanks to new tricks, better luck manipulation, and better optimization.
Published on 3/24/2017 12:00 AM
Obsoletes:
SMS Wonder Boy in Monster Land by Dadoc in 11:00.57

Emulator Replay:
BizHawk 1.11.9
Download (.bk2)
Webmasters, please don't link directly to the files. Link to this page or the front page instead.
Republication of movies from this site is only allowed under the following conditions:
Do not label them with speculations. If unsure, ask the site staff for details.